The land of the Lotus Eaters comes real and alive in Alfred Lord Tennyson’s famous poem ‘The Lotus Eaters’; the land “in which it seemed always afternoon” as the atmosphere was so peaceful and languid. The poem takes you to a dreamland and leaves you droopy eyed and intoxicated!

All round the coast the languid air did swoon,
Breathing like one that hath a weary dream.

Ulysses’ mariners, after ten years of war at Troy reached the island of the Lotus Eaters and tasted the flowers and fruits of the lotos that the dark skinned Lotus Eaters offered them. The enchanted stem they bore were laden with flower and fruit that had the power to change their minds!

Those who tasted the fruits wanted to sit idle on the shore with droopy eyelids. They sat listening to the music of their hearts, watching the waves lapping against the shore. They felt that ‘slumber is more sweet than toil’ and they believed that they have lost their appetite to go back to ‘Ithaca’. They wanted to spend the rest of their lives there .

How sweet it were, hearing the downward stream,
With half-shut eyes ever to seem
Falling asleep in a half-dream!

The source of Tennyson’s poem is Book IX of  Homer’s Odessey. Odysseus’ (Ulysses) men after munching on the delicious lotus fruit found the oars and waves too weary for them and they were lost in a world of blissful forgetfulness. They had to be dragged back to their ships and had to be tied to the rowing benches to resume their journey back home! Different opinions are there about the plant mentioned here, as the Greeks called various plants ‘lotos’. It is interesting to know that, ‘to eat lotus’ was later used to mean ‘to forget’ ! 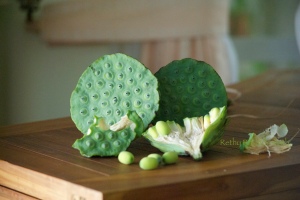 I would love to believe that it was the real  Lotus (Nelumbo nucifera) plant that both Homer and Tennyson had in mind . I have never seen a place like Cambodia, where all parts of the lotus plant are so widely used! I have babbled and rambled about lotus flowers in an older blog of mine ‘The Land Of Lotus Blooms’

Apart from the everyday use of  these exquisite flowers, the lotus fruit is a favourite  Cambodian snack. Vendors selling the bell shaped fruits on the pavements, is a common sight here. The young fruit pods have crunchy seeds inside and I found the taste very similar to the young green cashew nuts which we used to enjoy in our childhood days.The petals of the lotus flower fall off three -four days after blooming and the fruit pod grows. In Cambodia it is called plei chhouk. The young seed cups tied and stacked beautifully for sale is a delightful sight.

The fruit pod has a close resemblance to the rose of an old time metal watering can. We had a green watering can during our plantation days in Valparai- way back in the 90s- and our dear old gardener Raman used to call it ‘poovaali’. 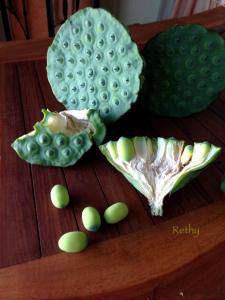 Lotus plumule tea is considered to have medicinal properties and is very popular.  Lotus seeds are used in cooking. Fresh ones are used while making fried rice. Dried and puffed seeds are available in the supermarkets. Sweet dishes are made of the dried lotus seeds, here in Cambodia and in Vietnam as well. It was coincidental that I tasted the lotus seed kheer ( makhane ki kheer) for the first time in my life at a dear friend’s house as part of Diwali celebration, yesterday!! Thanks Anupam and Kiran! I relished the incredibly delicious dessert, the warmth of their hospitality and my luck at the same time. 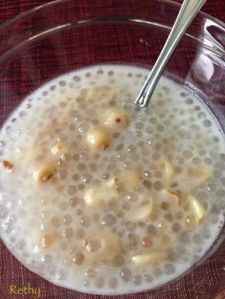 A Khmer dessert made of lotus seed, tapioca pearls, coconut milk and sugar and I love it!

The lotus roots (rhizomes) are used in soups, salads; pickled ones too are widely available. Back home, in Kerala, we have the sun dried lotus stem which is fried and used as a condiment. The stem is used with stir fried vegetables and meat in Cambodia. It is used fresh in salads too.  Cambodians use the lotus leaves  to wrap food. I have once tried a fried rice dish steamed inside lotus leaf, that gave the rice a special  exotic flavour.

Merm chhouk soup with fish and vegetables- I tried this recently 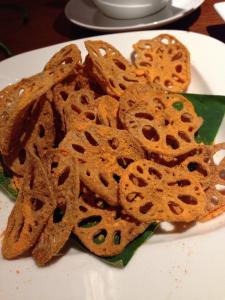 Let me ‘begin at the beginning’ and ponder over the lotus eaters of Tennyson again. If one reaches the land of Lotus Eaters, does one tend to be a dreamer? Lethargic, head-in-the clouds, lazy dreamer, who has a feeling that a soporific life where ‘all things always seemed same’ is a convenient way of living? just like the mariners who got hypnotized and intoxicated by eating the lotus of the Land of the Lotus Eaters? Do I belong to the crew of  the Lotus Eaters? Do I feel one with them?! Oh! That explains it all…. It is high time I thought like Tennyson’s Ulysses:

‘Some work of noble note may yet be done’ . And the powerful message he conveys is,

”How dull it is to pause, to make an end, To rust unburnish’d, not to shine in use!”

4 thoughts on “The Lotus Eaters”